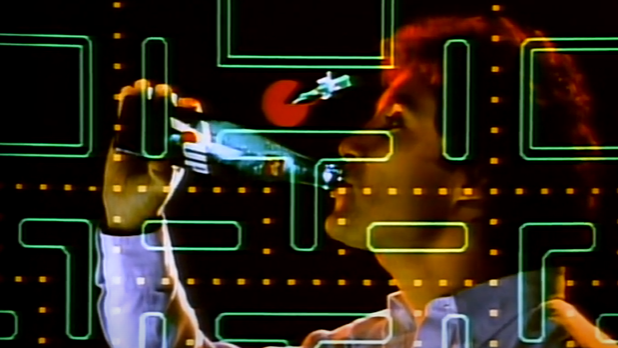 On the The Retro Network this week, Mickey and I discussed some of our favorite food commercials from back in the day on TRN Podcast 058. Most of my choices came from the ’80s with the exception of one that somehow sprang to mind. Cereal, candy, drinks, fast food—we had quite a wide variety of choices on the podcast.

Including our listener feedback and After Hours bonus podcast on Patreon, we compiled a list of 35 commercials in our TRN Podcast 058 Fave Food Commercials playlist on YouTube. Some real classics are in there like Clara Peller’s Where’s the Beef? for Wendy’s, Grey Poupon, and the Domino’s Noid.

Jason Alexander tells us what a real lettuce and tomato hamburger should taste like where “the hot, stays hot and the cool, stays cool.” This commercial just epitomizes ’80s advertising with a catchy song, bright fashion, and high energy. And it was also during my favorite McDonald’s slogan era of “It’s a good time for the great taste of McDonald’s.”

“Twizzlers makes mouths happy” was a very successful ad campaign from the mid ’80s through the early ’90s that transcended TV into other media like comic books. The images of the mouths eating the candy, singing, and doing crazy stuff like roping strawberries were ingrained so much in my young brain that I still hold Twizzlers in high regard.

There are two food commercials in the ’80s starring Matt LeBlanc that I really enjoy. The first is this Heinz Ketchup commercial which I remember wanting to try as a kid. Does the ketchup really pour that slow? Always wanted to find out but never lived in more than one-story house to test out. Yes, it’s ridiculous, but that was the ’80s! You have 30 seconds to make an impression and apparently, the physics of Ketchup did with me.

The other Matt LeBlanc commercial I adore is this Cherry 7UP commercial from 1987. The ’80s were vibrant with neon colors and this ad perfectly highlighted the new cherry flavor (and can) by only showing the color pink in the commercial. Black-and-white television sets were definitely still in use and even if you had a color TV, you could remember a point in time when there wasn’t such a thing. With the entire commercial being in black-and-white with only pink appearing in certain places and the 7UP cans, I’m sure it was a mind trip to most consumers. Plus, rotoscoping was somewhat a new effect in television for most to wonder, “how’d they do that?”

If you forced me to rank these in order, this 7UP commercial featuring Pac-man from 1982 would be at the top. Amidst “Pac-man Fever“, this ad really encapsulates a moment in time when arcades were the hottest hangouts and Top 40 radio ruled the airwaves. Several things makes this commercial great with the first being Pac-man becoming the first “cool spot” and changing his color to red. The animation style really seems ahead of it’s time too with the character motions and 3-D effects added to the 7UP logo. Another big factor in this ad is the cover of Kim Carnes’ mega hit “Bette Davis Eyes” with new 7UP lyrics.

One from the early ’90s that I simply couldn’t pass up was Bart Simpson starring in Butterfinger candy bar commercials. My favorite was one of the earlier ads where Nelson attempts to bully Bart but he draws the line when Nelson steals his Butterfinger. I remember being a huge Simpsons fan in those early years when they blew up and were even releasing albums. I had Bart t-shirts, collected the trading cards, and played the video games. Yet, Butterfinger is not a candy bar I particularly care for even though Bart did his best to persuade me. However, the commercials were always memorable with a mini Simpsons episode quality.
If you want to dive further down the food commercial rabbit hole, check out the TRN Podcast 058 playlist on YouTube which features my picks, Mickey’s picks, and listener choices. For more nostalgic podcasts, subscribe to The Retro NEtwork Podcast Channel.