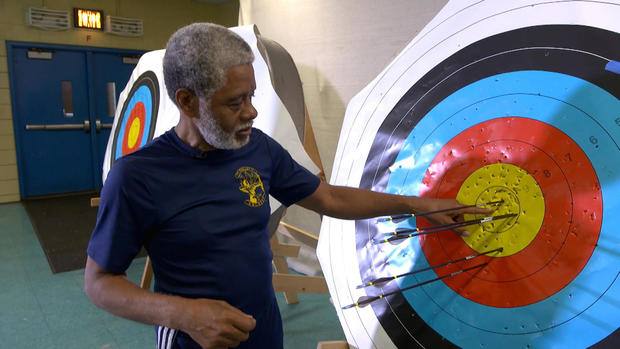 In our series “A More Perfect Union,” we aim to show that what unites us as Americans is far greater than what divides us. In this installment, Vladimir Duthiers of streaming service CBSN introduces us to a New York City man who’s using his love of archery to improve his community.

Larry Brown’s first experience with archery took place at a garbage dump in Queens, when his father got a cushion and taught him and his brothers how to shoot. Brown wasn’t just missing a proper target and coach – his “bow” was carved from a neighborhood tree.

“Everybody thought I was crazy,” he recalled. “They said, ‘Bows and arrows? Who shoots bows and arrows?’ Everybody was playing baseball, football, basketball. I’m in the back yard … and the next thing I knew, I had other kids wanting to learn how to shoot.”

After growing up in a tough Queens neighborhood, Brown’s skill launched him into the Ivy League as head coach of the women’s archery team at Columbia University.

But something was wrong. “At Columbia, I had 14 students for four years. Varsity, NCAA Division 1, the whole nine yards … But when I went to tournaments and I didn’t see any black and brown children, I said, ‘You know what? I’m in my 50s now. Let me make a little change here.'”


It was a big change: Brown stepped away from Columbia, and went back to his roots in the public school system. There, he taught archery basics to hundreds of New York City children in an unconventional space: the basement cafeteria of a Brooklyn middle school.

“It wasn’t about a job, it was about a mission,” Brown said. “And that’s what made it much more comfortable for me to do … and I’ve been doing that for now going on 16 years.”

Brooklyn native Dallas Jones is one of Brown’s prized pupils. He started learning from Brown at age 10 – now, at 16, he’s nationally ranked and is preparing to compete for a spot on the United States Olympic Archery Team.

“I can tell it’s gonna be a fun experience,” Jones said. “I’m not gonna try to put too much stress on myself … archery is about having fun. If I don’t have fun, it’s no point in doing it.”

Jones is the first African American in history to win a U.S. national archery tournament. He has his eyes fixed on competing in the 2020 Olympics in Tokyo – and hopes to make the Olympic team at least three times.

“I can be a role model to anybody else that didn’t know really too much about the sport,” he said. “I surely hope I can get more people into the sport, especially people of color.”

When he thinks about Jones’ success, Brown said, he feels “joy and happiness.”

“But the success that I see with him, I also see in children who don’t get as far as he did, but they came through the program and they learned from it,” he said. “One of my students who started the program here in Brooklyn, at 11, she just got her master’s degree … So they both rose to the top; different fields, but they came through the same channel.”

“The greatest reward is them,” he added. “I mean, outside of a medal, outside of getting paid, outside of all the external attributes, the true growth is the reward of a living person doing what you taught them to do, and it changes their lives.”