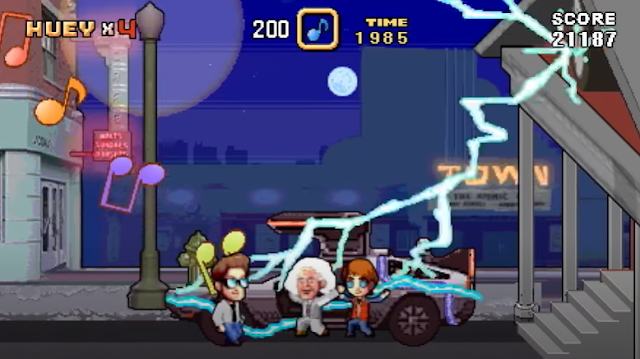 Earlier this year, Huey Lewis and the News released their first new album of songs in nearly 20 years. The first track I heard from Weather was “Her Love is Killin’ Me” which pretty much encapsulated the upbeat American rock that we all fell in love with back in the ’80s. Of course, it never hurts to play directly to nostalgic fans’ hearts and that’s exactly what he does with his latest music video.
The latest single from Weather is called “While We’re Young” and features a totally animated music video that looks like it could’ve been released on Sega Genesis. The side-scrolling journey follows Huey through his path of life from New York to San Francisco to meeting the band to stardom. There’s also a fun clip of Huey walking past Marty, Doc, and the DeLorean Time Machine from Back to the Future!
And speaking of movies, “While We’re Young” is featured on the soundtrack of the new Netflix original film Animal Crackers. Watch the music video below and find the Weather album on Amazon Unlimited, Spotify and everywhere you get your music.